The Adelaide Canoeing, Caving and Climbing Club. Maybe that’s what we should rename the club. There was some of all of that on the weekend trip to Blanchetown and Punyelroo. 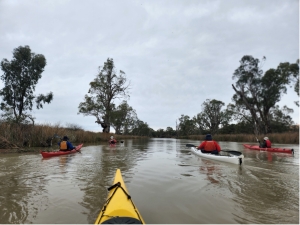 The winter weather in the Riverland is normally much better than Adelaide, but not for this trip. Five paddlers set from Blanchtown on Saturday morning. The sky was overcast with a stiff headwind and the temperature reading a chilly 9 degrees. A bit of brisk paddling soon warmed us up. We crossed the Murray and headed up Cumbunga creek, threading our way through the dead gumtrees. We tried not to disturb the pelicans while being serenaded by the cockatoos, who must be preparing for spring.

The channel soon narrowed as we approached Roonka Conservation Park. This is where our first mishap occurred. Having done this trip many times I didn’t bother bringing my GPS, wandered up the wrong channel, and soon found myself in a dead end. I was firmly wedged in a thick bunch of reeds which I had tried to push through. Despite much pushing and pulling I was stuck, and was slowly resigning myself to a winter swim. Julie managed to attach a rope to the end of my kayak and pull me free. Many thanks Julie.

After backtracking and finding the right channel we soon found the Murray again, and crossed the river looking for more backwaters. Going up the narrow channel behind Julia Island, we found a secluded lagoon where we stopped for lunch. This didn’t take long thanks to the cold weather, and we were soon back in shelter of our kayaks, continuing upstream. The lagoon narrowed at the northern end of Julia Island, and we had a short portage over a road before getting back into the Murray River again.

We decided to head home on the Murray, taking advantage of a good tail wind and a fast flowing current. Thanks to the winter, we had the whole river to ourselves. We gently paddled past the golden cliffs and magnificent gum trees, still being serenaded by the local cockatoos, until we reached our launching spot.

The group split up here. Some going back to Adelaide, while the rest of us set off to Punyelroo Caravan Park. We would stay for the night before Sundays paddle.

Thanks to new member Ghanshyam for being well prepared  and brought an electric heater and kettle. We managed to stay up in the cold and chat for a while before retiring to our tents for the night. With two sleeping bags, an insulated mattress, a couple layers of clothes, and a beanie, I had a warm cosy night.

Next morning was a leisurely start as we waited for Abelardo to come up from Adelaide for the Sunday paddle. We set off from the Caravan Park, and headed directly across the river into the lagoon to try and find Punyelroo cave. This would have been much quicker if I had my trusty GPS. We eventually managed to locate the entrance and dragged the kayaks up out of the water. We then

replaced our PFD’s and spray decks with helmets and head torches, and entered the cave to do some exploring.

Punyelroo cave is supposed to be about 3 kilometres in length. I don’t think I have ever managed to get more than a hundred meters into it before my enthusiasm gives out. We spent a good twenty minutes crouching under low roofs, scrambling over fallen boulders, banging helmets on rocks and bruising shoulders on rocky walls before called it quits. We sat for a while in the pitch darkness and total silence, imagining what it must be like to trapped in a place like that. After emerging back into daylight and fresh air, we got back into our kayaking gear and carried on up the lagoon.

The Murray river levels were high due to all the rain the country has been having. The caravan park manager told us that it was now possible to paddle all the way up the lagoon into Swan Reach, and then join the Murray river again. We reached the top end of the lagoon, and sure enough the channel was high and clear, with a good current flow. 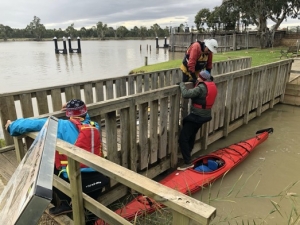 Not enough space go under

We slowly made our way upstream, paddling right over the bridges and pipes that would normally stop us. Our luck lasted right up to the end of the channel, a few meters from the Murray. The raised river level now worked against us. The footbridge across the channel, normally easy to paddle under, was now impassable. Only a few centimetres of clearance, and no easy landing due to all the reeds.

Desperate times call for desperate measures. By standing up in the kayaks, it was possible to climb up over the bridge, and then drag the kayaks out of the river through the reeds. After everyone was over, we had a well-deserved rest and snack on the grassy bank. Shortly after, we took advantage of the current to take us back down the river back to Punyelroo and the (heated) cars, and headed back to Adelaide 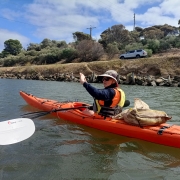 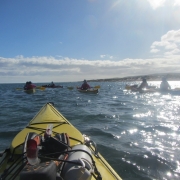 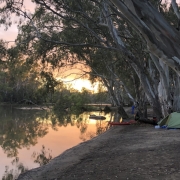 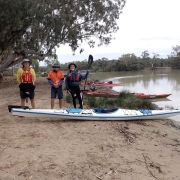 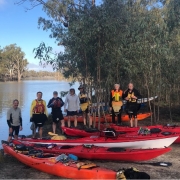 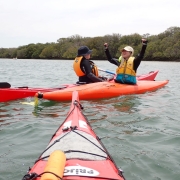 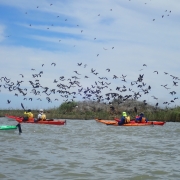