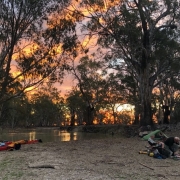 Things didn’t start well. Some of us decided to travel down a day early to avoid the traffic and find a suitable launch and landing spot. We soon discovered that the tracks in the Murray Sunset national Park didn’t match the maps we had, and some of the tracks were blocked due to the high levels of the river. Eventually we managed to find a suitable spot at the mouth of the Mullaroo Creek near the regulator, sent out new directions to the rest of the group, and settled down to wait for them around the campfire.

Next morning, after everyone arrived, we launched into the Murray River above the regulator. The regulators are wonderful for the health of the river but they don’t make life easy for kayakers: it would be virtually impossible to portage a loaded kayak around the regulator.

We made very good progress down the Murray thanks to the strong flow adding 2-3 km/hr to our speed. After a civilized lunch on the lawn at Lock 7, and a chat to the lockmaster as he let us through, we carried on down the Murray to the entrance to Toupnein creek. The creek was also flowing strongly, carrying us between banks lined with magnificent gum trees. We quickly found a lovely site and stopped for the night. 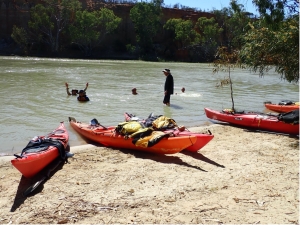 Next morning we woke up to another perfect day and, after a leisurely breakfast, we packed up camp and drifted down Toupnein creek again until it re-joined the Murray again. We stopped below the Kulkurna Cliffs on a sandy beach for lunch, and took the opportunity for a cooling swim. After lunch we made good time down the Murray, helped along by the current, and took the opportunity to have a look at entrance to Salt Creek, wondering how to organise a trip which would include the Lindsay river and into Salt Creek and from there to Chowilla. Maybe next time.

From there it was a short paddle past Higgins Cutting to find the entrance to Lindsay River. Luckily this turned out to be wide with not much flow, as from now on it was all upstream! After a few kilometres we found a nice secluded backwater and landed to make camp. Tents were soon put up, wet paddling gear was changed for more comfortable clothes, supper was made and eaten, and the group settled in around the campfire to discuss solutions to the world’s problems.

Day 3 saw everyone packed and ready to leave at 9am, we made good progress up the Lindsay, which was still wide and slow. Eventually we made it to the junction with Mullaroo creek, had a break for lunch and turned up into the Mullaroo. Progress was now a bit slower as the creek was narrower, with a faster current to overcome. It was also more interesting, with lots of twists and turns and fallen trees to navigate past. This kept us occupied until about 3pm, when we called it a day, found a nice campsite and stopped for the night.

Peter decided that, since the weather had been so perfect with warm nights and no mosquitoes, he would skip putting up a tent and sleep under the stars. This proved to be tempting fate too much, as a few hours later the clouds rolled in and the first few drops of rain started to fall. After a hurried meal, and an even more hurried putting up of a tent by Peter, everyone skipped the normal evening conversation and had an early night. 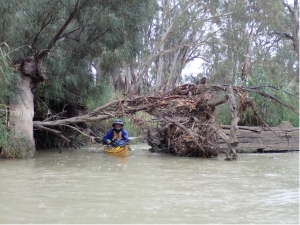 It rained lightly but steadily through the night, but luckily cleared up by morning. We were on the water 30 minutes early as everyone had had an early night. We were eager to get going before the rain started again. The creek slowly got narrower and more choked the further we went upstream, but we managed to navigate all the obstacles without having to resort to getting out of the kayaks and dragging: somehow there was always a way around or through the fallen trees. About midday we finally spotted the finish spot with warm dry cars waiting.

Kayaks were hurriedly unpacked and loaded onto the cars, carefully trying to avoid getting too much mud into the cars. Everyone now relaxed as the adventure was over, or so we thought. The overnight rain had turned the tracks out of the park into a slippery mess, churned up by all the departing Easter campers. After about 20 kms of frantic sideway sliding, wheel spinning, and steering wheel gripping, we finally made it back onto the sealed road, and then on to Renmark to have the customary bakery stop to swap stories and say goodbyes.