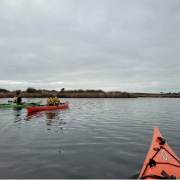 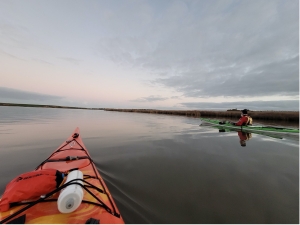 Winds south westerly 0-5knots predicted felt like 8knots. The small group comprised of Simon Langsford, Peter McLeod, Matthew Eldred as trip leader. We gathered at Wally’s landing for the overnight paddle to Currency Creek. Peter was unable to stay the night due to work commitments and would return to the cars after lunch at Clayton Bay. We set off with the new paddle plan in place making our way through the reeds and into the lagoons to disturb the 100s of black swans that call it home.
Wasn’t long before the water ways widened, and we were heading to the Goolwa channel where we would turn left for lunch at clayton bay.

After lunch the team followed the northern bank of Hindmarsh Island protecting us from the southern wind. As this was a small back track west to currency creek, we were able to line Peter up with the Finniss river and send him on his way under sail. 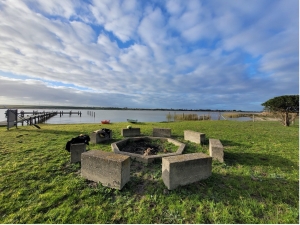 Now there was two. Simon and Matt followed Hindmarsh Island until we reached the eastern bank of Currency creek. Finding camp at around 3:00pm we decided to set up the tents unload the kayaks and have a late afternoon paddle further up Currency creek.

The night-time activities were dinner and telling stories around the camp fire under the cold winter’s night.

Winds Northly 5-10knots predicted and felt like it. A frosty start to the day and the fire was re-ignited to defrost us from the night’s sleep. Camp pack up was quick and on the water by 9am. Today’s route we followed the western banks of Currency creek and around the islands at Goolwa north. Not to trace to much of our path from the day before, we stuck to the opposite sides of the rivers.

The trip was success and Simon is keen to attend again and explore more of the lower lakes. 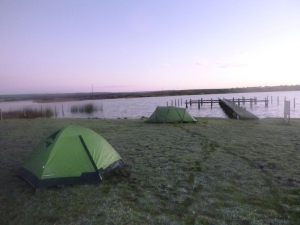