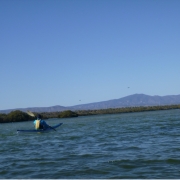 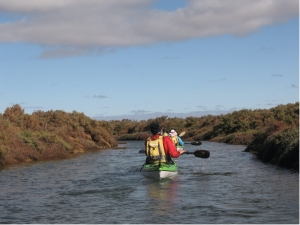 Simon, Anne, Kaye and Stephen joined the locals Steve and Greg for a paddle from Port Augusta to the top of Spencer Gulf. Greg supplied a couple of maps, (so we wouldn’t get lost) with the highlight points marked. We started with the wind and tide helping as we paddled past Matthew Flinders’ lookout at Red Cliffs and under the railway bridge. Then with mangroves on one side and the Flinders Ranges on the other we headed north. Steve suddenly led us into the mangroves, negotiating an obscure entrance to show us the historic salt works.

We climbed a sand hill to find old concrete tanks and a large rusted valve. The tracks around the area were very slippery.  We walked around and saw an old flood gate used to control the water flow into the salt pans. Steve also pointed out the directions of major Aboriginal trade routes and the importance of the Port Augusta area as a meeting place for these.

Top of the Gulf 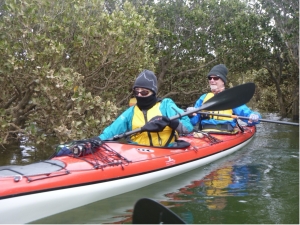 Kaye and Steve in Spencer Gulf

Back in the water we paddled under the ruins of the salt works trolley bridge as the Gulf started to narrow significantly. Approaching the top of the Gulf required single file paddling and careful steering around the tight bends, particularly for Kaye and Stephen in their double kayak. Luckily there was a wider turning area at Yorkeys Crossing. Greg paddled through the pipe under the road crossing and informed us that it was definitely the top as he was out of water. We made a hasty retreat as the tide had turned and we were noticing the drop in water level. We made it past the old bridge without hitting submerged concrete blocks and back into wider and deeper water.

The paddle back saw us zig zag from one side to the other to gain some shelter from the wind which was definitely blowing much stronger than forecast. We also had a much needed rest in the lee of a small island. Lunch was enjoyed at the rail bridge by Red Cliffs before facing the last exposed stretch back to the cars. The outgoing tide working against the strong wind set up rough choppy waves, but nothing we all couldn’t handle. Many thanks to Greg and Steve for escorting us on this magnificent paddle. We covered about 20 km and besides the great scenery saw lots of birds, Great Egrets, White Faces Herons, Pied Cormorants, Hoary Headed Grebes and also seal near the launch.

The weekend was to include diving with the cuttlefish at Whyalla. However, a bad weather forecast caused the Dive Shop to cancel our bookings. Kaye and Stephen also missed out on their glass bottom boat tour of the cuttlefish. We will just have to return another time. 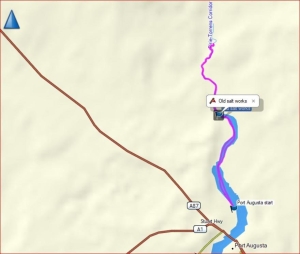 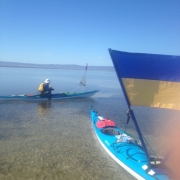 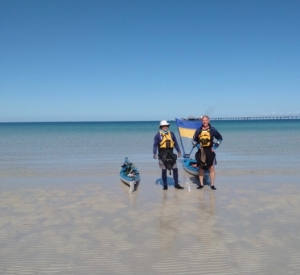 Steve and Gregg at Spencer Gulf

The crossing had been on the radar for several years as quite often when at Cockle Spit we would peer at the distant view of the tanks at the Port Bonython facility and wonder what if!  We consulted Google Earth and measured and checked possible routes. Gaining information and understanding of the wind and tides in the area was critical. We consulted with several sailors and told us stories of wind and waves in the area and the many challenges with currents. We knew that in windy and high tidal flows this a dangerous area that you should never underestimate the risk.  The decision to paddle the crossing would have to be dependent on ideal conditions.

Leading up to the crossing wind and tidal flows were considered.  The 7 day forecast on Willy Weather indicated that Monday 2nd May would be ideal for a West to East crossing. Daily checking reaffirmed that Monday would be the day.  Light northerly winds and a low tide of 0.8 at 1:30 pm.

Final arrangements were in place, John Case would do the car portage. Paddlers were myself (Steve Carter) and Greg Watts.  Our other sea kayaking mate Paul Caden from Cowell was invited but he was committed to seeding crops with his son, much to his annoyance.

We departed the beach at Point Lowly at 10 am and once around the Point we set a bearing of 090 degrees.  This course allowed for southerly tidal slip and to arrive at the tip of Wards Spit.  We user our sails to take advantage of the slight (approx. 5 km/h) northerly.  Sea conditions were smooth but the out flowing tide was evident.  Eventually the water became shallower as we could see the sea grass.  Using the 2 navigation beacons we reconciled that we were south of our check point and we then headed north to land on Wards Spit at 2 pm.

A BREAK ON WARDS SPIT

A quick rest and stretch on the Spit.  By now the northerly had dropped out and the water glassed off.  The dark blue line of wind was in the south and eventually a slight southerly wind kicked in.  With this favourable wind we set off to Port Germein.  We used both compass and the land marks on the Southern Flinders Ranges for this section. 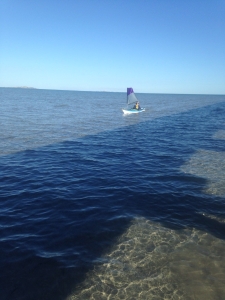 Eventually we rounded the end of the Jetty.  Phew! Only 1.8 km or so to land.  We landed at 4:18pm and proceeded to portage the kayaks.  We were met by John and the car as he had driven over the flats to greet us.  Greg and I raced to pack up and load the car as in the inflowing edge of the water moved ever closer. Once at the carpark we stopped and had a celebratory beer for not only the crossing but also Greg’s 63rd birthday.

The tidal influence was what we expected, we had estimated a flow of 3 to 4 km/h and know it could be higher in other tidal conditions.  On Monday high tide was 2.8 and low of 0.8 however tidal variations of high 3.6 to a low of 0.2 would necessitate making greater allowance for tidal slippage.  The influence of wind and tide also needs to be considered carefully.

Not sure if this is the first crossing of Spencer’s Gulf at this position. (perhaps the first crossing claim could be verified by some of the long term club kayakers) If it is the first Point Lowly to Port Germein crossing then Greg Watts has a wonderful way to always remember his 63rd birthday.  If it’s not the first, we celebrate our achievement.  Distance 23.59 km.  Time 4:18.