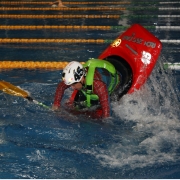 CHECK IN AT WESTMINSTER 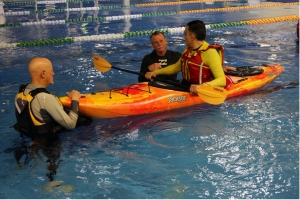 Mark and Terry on the bench taking photos in addition to dedicated partners watching the antics.

Again we had plenty of pool room, especially with a few less rollers this time. Very interesting to see how the Playboats perform in relation to the more traditional whitewater kayaks- all great entertainment from the sidelines.

All of the group achieved multiple rolls, both left and right side Greenland Rolls as well as others and lots of learning happening. 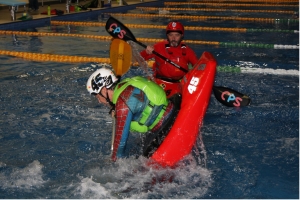 The evening was very successful and I could see plenty of smiling faces. Many Thanks to Westminster for access to the pool and to Phil Doddridge for making arrangements with Westminster and running the evening.

I look forward to the upcoming Beginner Session on Tuesday 9th August. There are still tickets remaining, give Phil a call if you are unsure about attending. 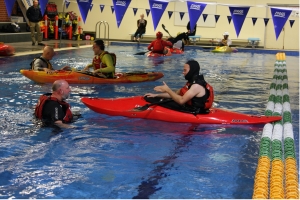 Action in the pool 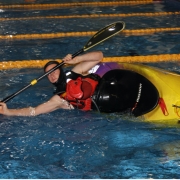 Check in at Westminster 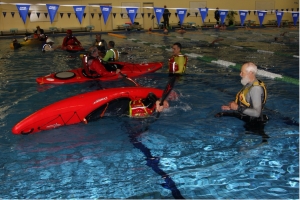 Phil called in sick, so Mark did the briefing and outlined the rules to ensure we protected the pool perimeter and adjacent lanes. Big welcome to new Club members Reg Brown, Clark Ernst and Terry Holder and special thanks to Gianni for encouraging them to join ACC. Terry has booked for Beginner sessions but took advantage of coming along to see what the sessions where all about. Was also good to catch up with Benita Rosario supporting Gianni and taking photos of the Freestyle kayaks.

All arrived at 6.30pm and lucky to get on water before our scheduled 7pm kick-off. We started with three (3) lanes but ended up being offered another lane after most of the swimmers finished their session at 7.30pm. All paddlers had previously achieved a roll, either going back to summer or more regularly for our Polo Players. Most worked in pairs and everyone had plenty of on-water time with a good 2 hours playing.

Fun in the pool 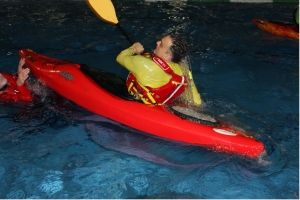 Most of the group were straight into their rolling, while others conducted warm-up exercises such as capsizing in Tuck Position and Balanced Brace.

It wasn’t long before all were achieving serious rolls, some on both sides and Leigh and a few others also tried out the Freestyle kayaks. I could see Euro blades and Greenland paddles being used as well as a few nibble hands!

The evening was very successful and there were plenty of smiling faces. Many Thanks to Westminster for access to the pool and to Phil Doddridge for making arrangements with Westminster and arranging kayaks for all participants.

I look forward to the next Advanced Session on Tuesday 26th July followed by Beginner Sessions in August.