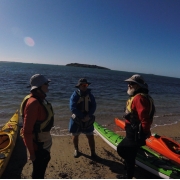 Five paddlers took advantage of the glorious weather to go for a paddle out of Victor Harbor, around the Bluff and out to West Island

The swell was a manageable 1-1.5m as predicted, but the weather forecast did not mention the chop, which made conditions a bit challenging, especially around the Bluff where there was a lot of rebound.

After launching from the shelter of Kent Reserve we made slow, steady progress to West Island, where some of the group chose to go around the exposed seaward side for some excitement while the rest chose to go on the sheltered side to check on the seal population, which is looking very healthy.

Kings beach looked inviting, so we stopped there for lunch and a leg stretch and a chat with the passing hikers. Launching should have been easy except for a sneaky rebound wave coming in from the side which resulted in one swim and a few near misses. 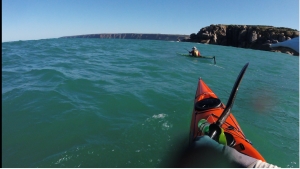 Pushing back into the 10 knot wind made things a bit chillier, but we were soon around the Bluff into some more sheltered water. We stopped in at Wright Island to check out the bird population which is also looking very healthy.

Some dolphins made an appearance, but were not feeling social and moved off following a school of fish.

Landing back at Kent reserve we left the kayaks on the beach while we went to retrieve the wheels from the cars. Unfortunately someone in the group neglected to pull up his kayak far enough, and by the time we got back to the water it was upside down in the surf a fair way down the beach. It is going to take me a while to get rid of all that sand in the kayak.