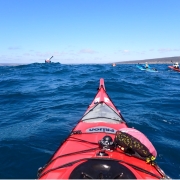 A very successful return paddle to Kangaroo Island. Paddlers were: Phil Doddridge, Mark Loram, Charlie Walker, Peter Vincent, Matt Eldred, Stephen Moore and new member Hugh Macmillan. This was the first crossing for Peter, Matt, Stephen and Hugh, so there were a few smiling faces when we arrived back at Cape Jervis. Well done paddlers! Trip was led by Phil and was aimed at demonstrating splitting of the tide to achieve the most efficient crossing.

The early birds in the group arrived at Cape Jervis at 8.30am. There were a bunch of keen kayakers outside our group already there prepping for a training run to Blowhole Beach. We saw Tresh preparing his new/old 1980 Greenlander kayak, a familiar face in addition to Mark Benjamin. Mark (L). Phil and Hugh arrived just afterwards, with Mark L being a late starter, having just been released from lockdown. After loading up and a safety briefing from Phil we set off about 10.15am, following the coast east to avoid the ferry’s path. 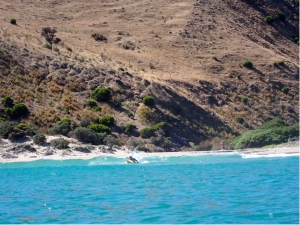 We then set our bearing for Cape Coutts and headed out on our adventure, with only whitecaps between us and the safety of Antechamber Bay, just east of Cape Coutts. And yes, (as observed form the drive down the hill to Cape Jervis) the conditions were lumpy with swells reaching 2 to 2.5m. The wind was from the south east at around 15 Knots and slightly above forecast. The tide was still on the ebb until 12.30pm, so we had a slight advantage to balance the wind.

We had a nice sunny day but with the wind and the breaking waves, all very glad we had opted to wear CAGs. Crossing time was 3.5 hrs of solid paddling then overall a total of 4 hours including the short portage into Chapman River, over 22km.

Conditions eased as we entered Antechamber Bay. There was still enough swell to practice our surf landings. Phil showed the way and Charlie provided the entertainment with a stern first landing in his P&H Valkyrie. Didn’t take long for the portage and we were all looking forward to enjoying the campsite and surrounds with the early arrival at 2pm. Once in the river Matt noticed the plentiful mullet and wished he had packed his fishing rod. The paddle down the dead flat and picturesque Chapman River felt like another world compared to the crossing.

We paddled further up the Chapman River to campsite No 12 that Phil had previously booked. We were welcomed by a new bridge – apparently styled on the Onkaparinga River Suspension Bridge at Old Noarlunga. Quite a few dollars have been spent since out last visit. We later discovered a brand new drop loo very close to our campsite – sheer luxury!

After we settled in, Matt, Peter and Mark completed a 3.5km exploration of the river with picturesque paperbarks on the bank. Peter was rather happy with the bird life.

The campground was pretty busy. We made an early appearance at the camp kitchen, admiring the stunning views of the Chapman River. We had a very pleasant evening and turned in early and slept well, being serenaded by several Boobook Owls during the night. Also brought back memories of Coffin Bay with a few in the group being visited by friendly mice during the night.

Back on the water 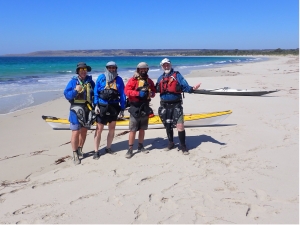 Happy paddlers in the beach at KI

The next day back on the water by 10am. The water conditions from the beach looked perfect, not a breath of wind or a sign of a whitecap as far as the eye could see. The plan for the day was to head for Blowhole Beach and play with the tides during the crossing. We stuck to this plan, however the winds and tide were not favourable, pushing us further east than we would have liked. Once again the tide was on the ebb until 12.30pm, particularly noticeable on the GPS track, but with the flood assisting our path to Blowhole Beach.

Conditions on the water started off perfectly until the seas got very mixed and choppy which made for an interesting paddle. 21km and we landed at Blowhole Beach for a welcome leg stretch and bite to eat after the 4.5 hour crossing in messy seas. Wind was from the north and again above forecast, mostly around 12-15 knots.

After lunch it was only a quick 9km paddle.  Back to Cape Jervis where 7 tired paddlers loaded their kayaks and headed home after a very successful and enjoyable weekend. For the Club it was the first paddle across Backstairs Passage for the year and for 4 of the members it was their first crossing…. but by no means their last. Stay tuned for the next planned crossing, perhaps in a spring tide to really show the tidal influence in Backstairs Passage.