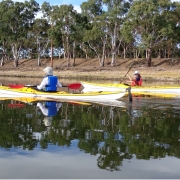 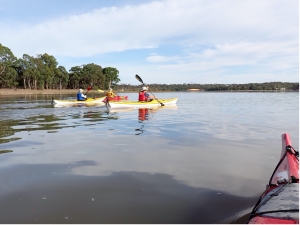 Three paddlers joined Jo for her Sunday Peer Paddle at Happy Valley Reservoir this morning, taking advantage of a perfect paddling day. Water looked like glass when we arrived, with several fishers preparing for a day on the water, hoping to catch a Murray Cod or Callop.
How different the car park was since last paddle, plenty of parking available when we arrived and the coffee van getting prepared for a busy day. Just as well, as cars loaded with Sit Ons and Blow Up kayaks soon started to arrive. Happy Valley is perfect for a training paddle, with the option of multiple circuits around the 4km perimeter. This a great location for novice kayakers building up their kayaking fitness, but also for experienced paddlers just wanting to get back on water. 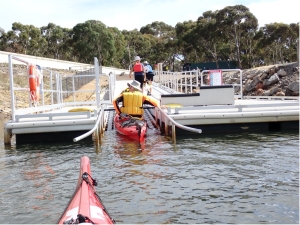 Getting out of the water in Happy Valley Reservoir

We completed two circuits, distance 7.4km in just under two hours. A great easy way to start the day, with the reward of that cup of coffee on completion. Even used the kayak launch system this time, worked very well and more gentle on the kayaks. Happy Valley is turning out to be a very pleasant Sunday paddle, so come along and join the next paddle. Jo Molsher has been a member of the Community Reference group for the Reservoir and as the Opening Day approached, she has been suggesting we establish Happy Valley as a regular paddling event. Based on today’s attendance with 13 members booking there will be many returns to this lovely and very handy location. The paddle was organised and led by Jo with the intention of her leading regular paddles at Happy Valley. Everyone enjoyed the morning and there was plenty of support with Instructors Wayne, Libby, Anne, Simon and Mark in the background. 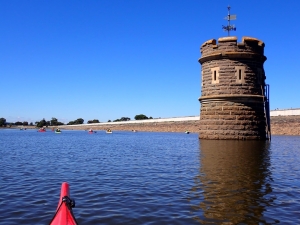 Paddlers started arriving just after the scheduled opening time of 7.30am. A wise move, as it wasn’t long before the carpark was starting to fill up. This is understandable so soon after the opening day and it was a perfect day to be out on the water. After being tempted to stop at the on-site coffee van, we drove cars down to the Kayak Drop-off Point and unloaded before going in search of a carpark. There are three (3) main areas just back from the launch point, but cars can also be parked along Chandlers Hill Road or Berkeley Road. For future paddles, we suggest bringing along a trolley, getting a park on arrival and then walking your kayak down to the launch point.

There was plenty of activity on arrival with several fishing kayaks being launched and very excited children running around with fishing rods. The dam walkway was also very busy with walkers and joggers enjoying a day out. This is also a great location to get out and explore the dam perimeter with an early morning walk.

After Jo’s briefing we helped each other on water and set off in an anti-clockwise direction. Given that the perimeter is only about 4km, we opted for a couple of circuits with a drink stop mid-way.

Relaxing in the Reservoir 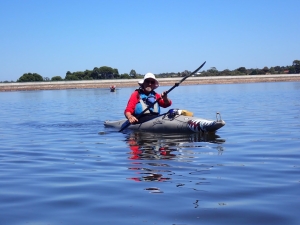 We had a very relaxing paddle around the perimeter and the day couldn’t have been better. Hardly any wind and barely a ripple on the water. It provided a great opportunity for all paddlers to update each other on Christmas and New Year activities as well as the occasional kayaking tale – the subject of whitewater paddling came up when we passed the southern inlet; with a bit more flow it would be great for demonstrating the principles of whitewater paddling (similar to West Lakes Outlet).

This site also brought back some memories for Libby, growing up on an adjoining farm and getting washed down the inlet sluice as an adventurous 13-year-old – and here are a few of Libby’s memories:

“The Adelaide Canoe Club paddle on Happy Valley Reservoir last Sunday was a great day for me, full of nostalgia.

I was brought up at “The Pines” O’Halloran Hill, the farm directly south of the reservoir. Our house was built by Captain Hallett (nearby Hallett Cove is named after him) in the 1840s.  My father, as a returned serviceman after World War 2, was permitted to run a pump from the reservoir to our farm. This was a great privilege providing excellent reliable water for the farm, in particular my mother’s dairy. I often went with him to check on the pump. Because of this, I knew how to gain access to the reservoir.

In my teens, I and three of my local friends, went for a picnic/wander there, in the middle of winter. Unfortunately, while exploring a little East of our pump, I fell into the outlet channel bringing water from Mt. Bold and was unable to climb out up the cement wall. My friends frantically ran along-side, offering sticks to help me get out, to no avail. The result was that I was swept into the reservoir proper. I was then able to swim to shore and come out through the mud to the grassy bank. Of course my clothes had to be dried and me warmed up, by a small fire, before returning home. My parents wondered why I smelt so smoky.

My parents never heard of the escapade until I had children of my own!

On Sunday, I was very pleased to see that the channel is still there today and was flowing (however it has shrunk in length and depth from my memory of it over 60 years ago!) Wayne was excited to see the fast flowing water, a potential site for white water practice, unfortunately OUT OF BOUNDS! 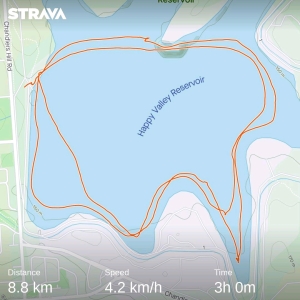 Thank you, Jo Molsher for organising this paddle. We are so glad that paddlers and fishers are allowed to legitimately enjoy the reservoir on and beside the water, but not in it. Esther looked very comfortable in her Dancer and showed good directional control while keeping up with the sea kayaks. Also good company for Wayne and Libby in their Dancers. After doing a bit of post-paddle research, I have discovered that Happy Valley Reservoir was constructed in 1897 with water being fed from Mount Bold Reservoir via the Clarendon Weir, and more recently the Desalination Plant.

The tower on the reservoir is called a Scour Tower and apparently is used to capture water for the water treatment plant (to be confirmed).

We were off water by 11am after a very pleasant paddle on a perfect day. Many thanks to Jo Molsher for the initiative and big welcome to new member Esther on her first paddle with the Club since taking out membership earlier in the week.